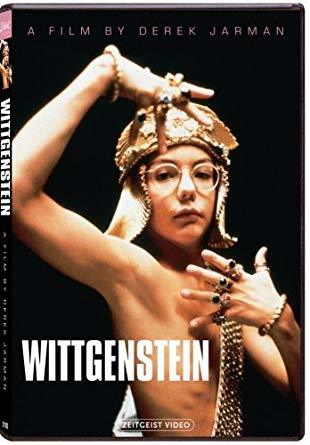 1993 sort-of-Biopic of the philosopher Ludwig Wittgenstein, directed by British filmmaker Derek Jarman. Notable for serious Lampshade Hanging of its studio set, in which brightly coloured costumes stand out against black-draped backgrounds, and in general a high degree of Breaking the Fourth Wall in the form of its onscreen and distinctly Lemony Narrator, who is Wittgenstein himself as a 12-year-old boy.

It had a difficult Script Life Cycle. The original draft was written by Eng Lit academic Terry Eagleton. Contrary to his reputation as a left-wing maverick, Eagleton delivered a rather low-key, realistic script, but Jarman didn't think it was fun enough and he heavily rewrote Eagleton's version, not entirely to the latter's unqualified delight. Jarman injected a lot of visual jokes and generally upped the level of humour, and the result was widely praised as one of the more original and thoughtful films ever made about a philosopher. When Eagleton's and Jarman's screenplays were published in one volume, it was pointed out that whereas in Eagleton's script the characters just talked about Wittgenstein's ideas, in Jarman's movie the ideas themselves are dramatised.

Jarman made the film while suffering from AIDS, and it was the last feature he made before his eyesight deteriorated to the point that he could no longer direct conventional films; his final film Blue consists of just a blue screen and a complex soundtrack of voices.

The adult Wittgenstein is played by Karl Johnson, who would go on to play another philosophical stoic. Also features a memorable early-ish appearance by Tilda Swinton as Bertrand Russell's Cloudcuckoolander mistress, Lady Ottoline Morrell.