Film / Women on the Run 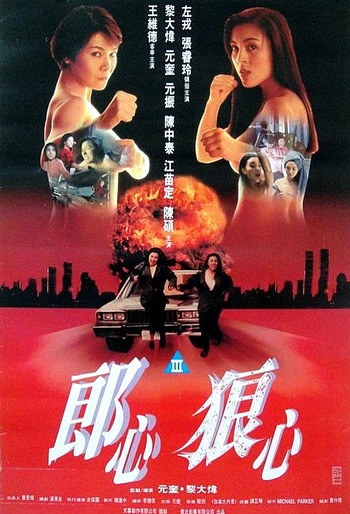 I swear, this is the one poster for the movie with the "least" amounts of nudity!
Advertisement:

Women on the Run is a 1993 Exploitation Film-slash-Martial Arts Movie directed by Corey Yuen, and its easily one of the most uncomfortable action films one is likely to come across.

Su-yin comes from a rural Chinese village, where she's a kung-fu practitioner since a child before winning a Martial Arts Championship as a teenager. Having big dreams and hopes, she decides to follow her agent to the big city hoping to make a name for herself, only to be betrayed and pimped to a whorehouse. Without money, she's reduced to working as a whore; her hopes crushed and nearly driven to suicide, Su-yin meets Mandy, a top cop from the Hong Kong police, who manage to talk Su-yin out of killing herself, because Mandy's boyfriend, David, have use for the two of them if Su-yin is willing to assist her for an overseas assignment. Little do the two women know what they're getting into, because soon enough they'll be on the run...

While acceptable as a martial arts movie, with at least six fight scenes and action sequences, ultimately the movie will likely a bitter, disgusting taste in your mouth due to its exploitative nature. Rape is used as a plot device more than once, and multiple nude scenes that comes at the most inappropriate moments (like this scene where Su-yin fights in the nude to save Mandy from being gang-raped

The film's violence, sexuality, and sexual violence earned it a Category III rating in Hong Kong (equivalent to NC-17).

Do not confuse this movie with Woman on the Run.