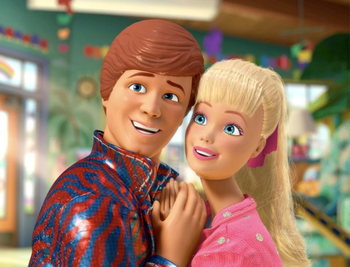 He can't help it. He's a girl's toy.
"I have a girlfriend now, myself, which is weird because I'm probably gay based on the way I act and behave and have walked and talked for 28 years. I think I was supposed to be gay. I think in Heaven they built, like, three-quarters of a gay person and then they forgot to flip the final switch, and they just sent me out and it was like, 'You marked that one gay, right?' and it was like, 'Oh no! Was I supposed to?'"
— John Mulaney
Advertisement:

A Camp Straight is a man who exhibits some or all of the common characteristics of a Camp Gay but is clearly heterosexual. He either has a girlfriend or only shows sexual attraction towards women despite his flamboyance.

Up until the 1970s or so (this is when people began to get more comfortable with openly gay characters as a result of social change), in many segments of society and media, men were assumed to be straight unless outed, no matter how feminine they acted. Thus, many films from the era of The Hays Code contain Camp Straight characters who are sometimes proven straight by a Last-Minute Hookup.

Some shows purposely do this to insert a gay character (or increasingly to insert a stereotypical gay character) without annoying the Moral Guardians. Today such a person is considered a Metrosexual, a straight person who acts gay. This kind of character also has some Values Dissonance involved. In the past, this kind of behavior was associated with people like The Dandy, and it was a symptom of them being ladykillers. In newer works, this character is more often used for An Aesop about judging people by appearance.

The Distaff Counterpart is very rare: there are few female characters in fiction (although rather more women in real life) who look and act butch while actually being heterosexual.

Compare Ambiguously Gay, Mistaken for Gay, Faux Yay, Gay Bravado, Real Men Wear Pink. For many of these fellows, an argument can be made for Camp Bi. If a character isn't quite "camp" but still undeniably girly, he may be In Touch with His Feminine Side.