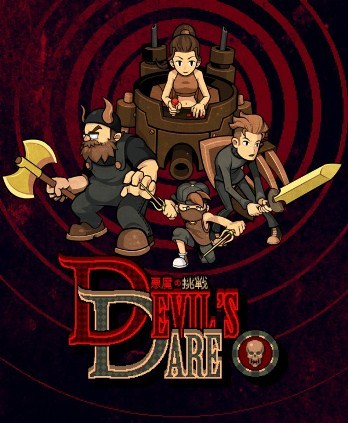 Devil’s Dare is Retraux Beat 'em Up fighter, created in 2014 by a Singaporean developer Secret Base. In 2018, it received an Updated Re-release named Streets of Red: Devil's Dare Deluxe, which was free for the owners of the original. It added a couple of hidden characters, various new enemies, and changed out Kingston's normal berserker helmet/axe for a mix of Arthur's armor and a Shovel. The updated version was ported to Playstation 4 and Nintendo Switch.

It is about a group of four nerds who have attended a pop culture convention when suddenly a zombie virus has been released and turned everyone else into different kinds of zombies. Luckily, all of them are ready to rise up to the challenge, and because they have somehow managed to turn into Expies of their favourite heroes, they also have a chance to come out of there alive. There are only four stages, which can be tackled in any order. Every succeeding stage will always be longer and more difficult, and running out of lives requires you to purchase continues. The game can be played alone, or in co-op with up to four players.

Has no relation to the Gottlieb Pinball of the same name.