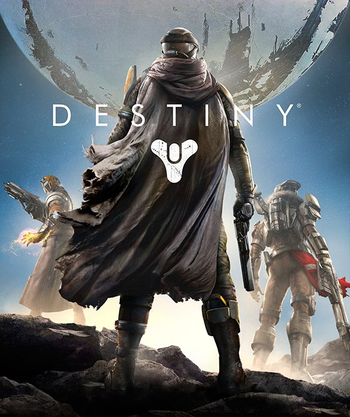 It doesn't matter who you are... only who you become. Become legend.
We called it the Traveler. And its arrival changed us forever. Great cities were built on Mars and Venus, Mercury became a garden world. Human lifespan tripled. It was a time of miracles. We stared out into the galaxy and knew that it was our destiny to walk in the light of other stars... but the Traveler had an enemy. A Darkness which had hunted it for eons across the black gulfs of space. Centuries after our Golden Age began, this Darkness found us, and that was the end of everything... But it was also a beginning.
— The Speaker
Advertisement:

Destiny is a Massive Multiplayer Online Roleplaying First-Person Shooter (though they prefer to call it a "Shared World Shooter.") developed by Bungie Studios and published by Activision. It is the follow-up to Halo following Bungie ending its contract with Microsoft after completing the original trilogy.

Destiny takes place in the distant future, after the discovery of a spherical object called "the Traveler" ushered in a Golden Age for humanity. Unfortunately, the Traveler drew the attention of a cosmic force known only as "the Darkness"; in the ensuing war, Earth was ravaged and the Traveler fell into a state of dormancy.

Centuries later, the last of humankind are protected within a city built underneath the slumbering Traveler. The Darkness is returning to finish the job it started, and it's up to the Guardians - those who can wield the power of the Traveler - to defend humanity and reclaim their lost empire amongst the stars.

The game has released the following expansions: