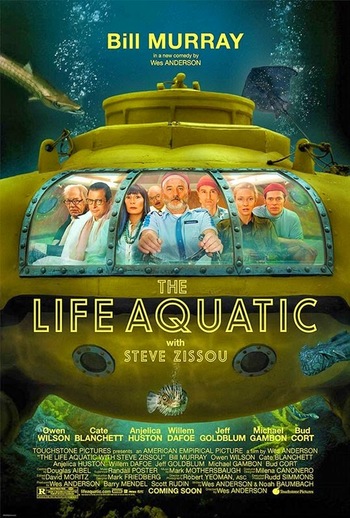 Festival Director: That's an endangered species at most. What would be the scientific purpose of killing it?
Steve Zissou: Revenge.
Advertisement:

The Life Aquatic with Steve Zissou is a highly stylized 2004 film directed by Wes Anderson, written by Anderson and Noah Baumbach, and starring Bill Murray, Owen Wilson, Cate Blanchett, Anjelica Huston, Jeff Goldblum and Willem Dafoe. It is a Spiritual Sequel to The Royal Tenenbaums.

Steve Zissou (Murray) is a world-renowned oceanographer and documentarian. Things are not going well for him. For starters, his documentaries have been getting less acclaim. His wife (Huston), who was once married to his arch rival Alistair Hennessey (Goldblum), refuses to join him on his expeditions anymore. And worst of all, during the filming of his last documentary, his best friend Esteban was eaten by what Zissou describes as a "Jaguar shark", a creature that — given the fact that the only one who has seen it was an apparently momentarily deranged Zissou — few believe exists.

Zissou announces that his next documentary will detail his search for the jaguar shark in order to kill it. When he (predictably) can't get funding through the traditional channels, he receives the unexpected help of Ned Plimpton (Wilson Playing Against Type), a Kentucky airline pilot who believes Zissou to be his long lost father. Zissou sets out on the search for the Jaguar shark. His eclectic crew includes Ned; Bill (Bud Cort), a "bond company stooge" sent by Zissou's producer to keep an eye on him; pregnant reporter Jane Winslett-Richardson (Blanchett), who ends up coming between Ned and Zissou; Klaus (Dafoe), a devoted German sailor with severe emotional issues; and a bunch of unpaid college interns.

A beautiful, ridiculous, hilarious, and heartwrenching film. Either that, or an infinitely incomprehensible one. Oh, and Henry Selick made the fish.

The Life Aquatic with Steve Zissou provides examples of: