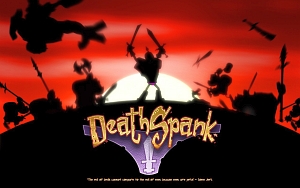 Justice For All!
Advertisement:

DeathSpank is a two-part Action RPG in the vein of Diablo, developed by Ron Gilbert of the Monkey Island series and centered around Idiot Hero Extraordinaire DeathSpank, self-proclaimed "Hero of the Downtrodden, Dispenser of Justice and Vanquisher of Evil". The first half, Orphans of Justice (or simply just DeathSpank) has our hero on a quest to obtain The Artifact, and later, rescuing orphans from Lord Von Prong. The second part, Thongs of Virtue has DeathSpank traveling to various locales to defeat those corrupted by the Thongs of Power. Both parts were released in 2010, first on PS3, and then on PC and Xbox 360.

A sequel known as The Baconing was released in August of 2011 for the three aforementioned platforms. Taking place after DeathSpank killed Sandy and established the land of Spanktopia, DeathSpank must once again save the world, this time from The Anti-Spank, created when DeathSpank wore all of the thongs at once.

If you've ever played a Hack and Slash, you'll know how to play this game.