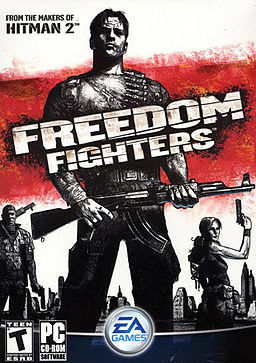 A Third-Person Shooter released in 2003, developed by IO Interactive of Hitman fame. An Alternate History began when the Soviet Union developed the first atomic bomb, and ended World War II by dropping one on Berlin, shifting the balance of power firmly in their favor. The USSR steadily expanded to encompass most of the world, with only the United States opposing them, until a massive invasion quickly overwhelmed the US. The player takes control of former plumber Christopher Stone, now the "Freedom Phantom", as he fights against the invaders to liberate New York City.

Well-received critically, though something of a Sleeper Hit, this game is notable for a surprisingly intelligent ally system. The player, can get up to twelve fighters under their command, and order them to attack specific targets or areas, secure and defend areas, or just follow the player. Allies (and enemies) will take advantage of cover and mounted machine guns. Also, it has a really great soundtrack.

A sequel was announced in 2004; however, little has been said about it since. But as of 2019, IO Interactive has announced that they're interested in doing a sequel in the future and they retained the rights to the game after they left Square Enix, though the only thing to come of this so far is a digital re-release of the game on September 21, 2020 on Steam, GOG and the Epic Games Store, with minor updates to get it to run on modern systems without mods, and which includes its soundtrack, as well as a PDF of the original manual.

Not to be confused with the Freedom Force games.