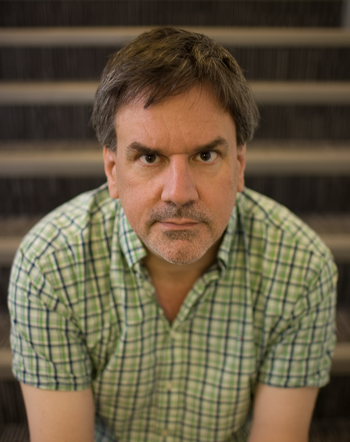 Ron Gilbert (born January 1, 1964) is an American computer game designer, programmer, and producer, best known for his work on several classic LucasArts Adventure Games, including Maniac Mansion , —the game for which he co-created SCUMM note  Script Creation Utility for Maniac Mansion, the engine used by all the Point-and-Click adventures made during LucasArts golden age— and above all the creation of the first two Monkey Island games.
Advertisement:

He also worked at Double Fine Productions with former LucasArts alumnus and fellow Monkey Island developer Tim Schafer. This game was The Cave, a Spiritual Successor of Maniac Mansion, and was released in 2013.

He is credited as instrumental in forcing the Unwinnable by Design concept out of fashion, a harsh and omnipresent gameplay component for the adventure genre in the 1980s. According to Gilbert's philosophy a player should not be punished for exploring the boundaries and possibilities of a game, but rewarded. His reformist design manifesto can be read here: Why Adventure Games Suck

He is the Trope Namer for Cutscene, coined while working on Maniac Mansion wherein he defined cutscenes as short "scenes" that "cut" away from the action itself, to show what else was happening in the game world when the player wasn't around.

Detailed Bio
In the early 1980's, when the Commodore 64 home computer was fairly new, a young college student named Ron Gilbert discovered the potential of the C64's BASIC programming language. A potential for creating games similar to those he had seen -and fallen for- in the arcades as a teen. Yet harnessing the C64's graphical power with the crude BASIC compiler was tedious work; a flexible library of commands did not exist. So Gilbert hacked the nights away to create one. When he finally finished his extension (appropriately named Graphics Basic), it was able to move sprites around the screen and perform other multitasking operations that were new territory on the C64 at the time.

Gilbert promptly sold Graphics Basic to a company named Human Engineered Software and, having meanwhile received his diploma in computer science, started to work there as well. He spent about half a year at HESware, programming arcade games for the C64. None of them were ever released; the company went out of business. Searching for a new job, Gilbert ended up at Lucasfilm Games. While the name of director George Lucas' company radiated magic and fame in the movie business, the video game department was still small, rather unknown and quite unsuccessful. Gilbert earned his living by doing C64 ports of Lucasfilm Atari 800 games. Soon tiring of mere rewriting, he was eager to create. He got his chance in 1985.

Ron Gilbert and Lucasfilm artist Gary Winnick had come up with an idea to create an adventure game set in a dark Victorian mansion populated by a mad scientist, his slightly retarded offspring and strange aliens. Not surprisingly, the heads of Lucasfilm Games were reluctant to invest into a man who had never designed a big game before. It took some time and a lot of persuasive talks until Gilbert finally got the thumbs up. The work on the graphic adventure game Maniac Mansion for the C64 began.

Ron Gilbert had a lot of plans for his program, and most importantly, he had a very distinct idea of what he wanted it to feel like. The player had to be connected to the game as directly as possible, to be able to concentrate on the challenge that the world posed. A new interface was needed, one that would eschew the inconveniences of a text parser. As there was no tool that would have allowed him to implement all his ideas, he decided that one needed to be created. So Gilbert programmed a scripting language that was named after the project it had been written for, the Script Creation Utility for Maniac Mansion, better known as SCUMM.

The key was a set of common verbs displayed at the bottom of the screen. The player could create sentences, and thus commands, by clicking on a verb and then on an object in the game graphics. For example, you would click on "Open", then on a door, and finally confirm to execute the action. Inventory items were used similarly. Interactive objects were highlighted by moving the cursor over them, thus abolishing the need for guesses. Although the verb system lost in versatility, it gained in accessibility - a feature that would be most important in a business that was slowly stepping towards the mass market.

Zak McKracken and the Alien Mindbenders, the story of a newspaper editor investigating an extraterrestrial invasion, was co-designed by Gilbert and David Fox, Matthew Kane and David Spangler. The game came out in 1988.

And then the pirate invasion was thwarted by the man with the whip. Ron Gilbert started designing a game about a young man and his quest to become a swashbuckler, but Lucasfilm Games intervened with a priority mission: a computer version of Indiana Jones' third adventure. Gilbert teamed up with Noah Falstein. Creation soon became a challenge when time grew short; the game was to be released in time with the movie, and the team had little more than seven month to finish its work. Although Indiana Jones and the Last Crusade received critical praise and sold well upon its release in 1989, both designers were slightly dissatisfied; they had wanted to implement many more things that were prohibited by the license.

The pirates had only been lying in wait; they stormed the gaming community in 1990 and met no defences. In The Secret of Monkey Island, the adventure of the pirate apprentice Guybrush Threepwood and his fight against the evil ghost captain LeChuck, Ron Gilbert laid special emphasis on the dialogues - conversations branched off to amusing topics and contained cross references. Ron Gilbert likes to think of Monkey Island as a concentrate of all his ideas and guidelines for adventure design. "It was an experiment, a chance to test my own theories and philosophy regarding adventure games", said Gilbert, and was obviously pleased with the results: "The Secret of Monkey Island is certainly still my favourite of the games I've done. It's tight. Every puzzle I thought about ad nauseam".

Not surprisingly, the popular Secret of Monkey Island received a sequel. Monkey Island 2: LeChucks Revenge, published in 1991, was a continuation of Guybrush Threepwood's escapades. By now, Ron Gilbert had proven to be one of the few true experts on making ingenious adventure games; but after eight year of working for Lucasfilm Games (meanwhile renamed to LucasArts), he felt ready to try surviving on his own. Already anticipating the decreasing importance of classical point-and-click adventures, Gilbert wanted to put his skills to use in a different segment of the gaming market. He voluntarily left the company in 1992 to start designing programs for a crowd that is far harder to please - children.

In March 1992, Ron Gilbert co-founded a software company together with Shelley Day. They called it Humongous Entertainment. Its objective was to create adventure games for kids. Edutainment was not exactly a big market back then, and Ron Gilbert imagined something deeper than colourful backgrounds and buttons that squeak when you push them. He wanted to tell interactive stories, but stick to the basic principles of adventure games. As Gilbert stated: "When you play Putt-Putt, it is very much like playing Monkey Island. I used the same theories". And the same engine: The Humongous games ran with a modified version of the SCUMM scripting language.

Putt-Putt was Ron Gilbert's first invention for his own company — a talking car. Putt-Putt joins the Parade, released in October 1992, introduced what would soon become a trademark of Humongous: the possibility to click on almost every object on the screen to trigger funny animations or sounds.

In 1995, Humongous Entertainment was financially potent enough to spawn a subsidiary. Gilbert and Shelley founded Cavedog Entertainment, a company intended to create mass market games. Not adventures, however; Gilbert knew that teens and grown-ups didn't buy these any more. The hottest trend were real-time strategy games, Westwood's Command & Conquer series had only recently triggered a boom. Cavedog hired the experienced designer Chris Taylor (Stonekeep, Test Drive 2) to create Cavedog's contribution to the real-time mania. Gilbert would act as a producer. Shelley and Gilbert realised soon that the plan was too big to finance with Humongous' money. Searching for a potent partner, they finally sold Cavedog and Humongous to GT Interactive in 1996. The result of two years of intensive work was released in 1997: Total Annihilation.

Its fate uncertain, Cavedog began cancelling projects. The 3D-Shooter Amen was the first to be given up, Elysium followed. Finally, the last remaining program, Good & Evil, was stopped. It had been the first project that Ron Gilbert had been designing himself after some years of acting as a producer. In November 1999, GT Interactive was bought by Infogrames. On 2/12/2000, Cavedog closed its door. Ron Gilbert left the company.

Since then, Ron Gilbert kept out of the games business for a long time. "It just stopped being fun. So much of the game industry is now about people's egos and making money", says Gilbert, and regrets "fans screaming and swearing at you in e-mail, thinking that you owe them" and "design taking a backseat to technology". Continues Gilbert: "There's a real lack of interest in pushing boundaries. I find a lot of games to be violent, morally hollow games, and there doesn't seem to be all that much effort to change that."

He made his return at the independent development studio Hothead Games, where he worked on the game Deathspank. Previously, he also provided consultancy on a number of adventure game, most notably The Secret of Monkey Island: Special Edition and Tales of Monkey Island: Chapter 1 - Launch of the Screaming Narwhal, two revival games of franchise he was deeply involved with, in 2009. On 2010 he left Hothead Games, as Deathspank neared completion. He later joined Double Fine, headed by former LucasArts writer/programmer/designer Tim Schafer, to work on The Cave. Ron would then keave the company and team up with Gary Winnick, founding Terrible Toybox to develop Thimbleweed Park.