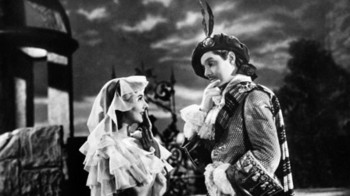 "Mm...the ghost might as well go west if she tags along."
Advertisement:

Casanova Murdoch Glourie is a rich, young Scottish lad during the 18th century who rather make out with the ladies than go to war and defend his honour against the hated McLaggen clan. But when a gunpowder explosion kills him after cowardly hiding, he’s unable to make it to the afterlife. His ancestors wait for him until he can avenge his honour by making a McLaggen descendant bow before him and apologize for dishonouring their name.

Centuries later, Murdoch Glourie is still haunting Glourie castle while his own descendant, Donald, is selling the old place.

A rich American girl, Peggy Martin, takes a fancy to the castle and convinces her parents to buy it, especially since Donald is a very charming fellow.

The castle is bought by the rich Martins, taken down, stone by stone, and shipped off to Florida, except the ghost and his misfortunes goes with it.

Not to be confused with The Ghoul Goes West, a film by Ed Wood.