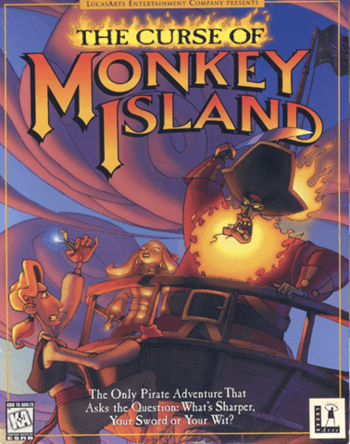 "I've sailed the seas from Trinidad to Tortuga and I've never seen anything like it! The engagement ring I gave Elaine has a terrible pirate curse on it. LeChuck is behind it, I'm sure. I should have known that nothing good could come out of that evil zombie's treasures. And if that's not bad enough, the clairvoyant I met in the mangrove swamp told me that if I am to break the curse and save Elaine, I will have to die!"
— Excerpt from The Memoirs of Guybrush Threepwood: The Monkey Island Years
Advertisement:

The third game in the Monkey Island series, The Curse of Monkey Island was released in 1997, six years after the previous installment, LeChuck's Revenge. With two of the three fathers of the series, Ron Gilbert and Dave Grossman, no longer working for LucasArts, and the third, Tim Schafer, being busy with other projects, no one was really around to explain the infamous ambiguous ending of LeChuck's Revenge, so the company decided to go with a Cuckoo Nest interpretation of it.

Curse starts off with Guybrush, adrift in a bumper car after escaping LeChuck's spell and his "Carnival of the Damned", arriving in the harbor of Plunder Island, just in time to save the island (and Elaine) from attack by LeChuck and his undead pirates. LeChuck is slain yet again, and Guybrush proposes to Elaine using a ring he found in the hold of LeChuck's ship. Unfortunately, said ring turns out to be cursed, and Elaine is turned into a golden statue. Guybrush's new mission is to lift the curse on Elaine and return her to normal (and defeat LeChuck again when the evil pirate once again comes back from the dead, this time as a fiery demon).

This game marks LucasArts' final use of the SCUMM engine note Humongous Entertainment kept using it for nearly five years after. This game also marks the first appearance of Murray, the franchise's Ensemble Dark Horse.

After being hard to find for a long time, the game was finally made available digitally on GOG.com and Steam in 2018.