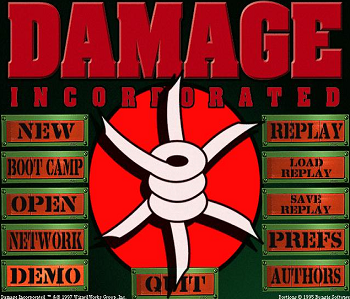 That's one way to style a main menu...
An early Tactical Shooter using the Marathon 2 engine that came out for PC and Apple Macintosh in 1997. Though obscure today, the game was one of the first first person shooters that took place in a realistic modern military-based environment and was likely the first to have the player command a fire team of NPCs.
Advertisement:

The game pitted the player as a USMC Force Recon sergeant leading a fire team of U.S. Marines to deal with terrorist threats. Today the game is an example of abandonware and can be downloaded from several sites.

Of particular note is that the creator of Damage Incorporated, Richard Rouse, is also the project head and writer of the cancelled Rainbow Six Patriots, a video game with a very similar premise.

Not to be confused with Damage Control, a Marvel Comics company that repairs damage caused by superhero battles.