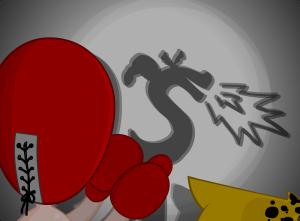 Dear Strong Bad, how do you make shadow puppets with boxing gloves on?
Advertisement:

Shadow puppets are a fun manipulation of light, shadow, and one's body parts (generally hands) to create images that are unexpected given the standard human body design. However interesting they are, there's only a limited number of times you can show "doggy, deformed rabbit, hand-shaped cactus" before it gets old.

Not with this trope.

With Impossible Shadow Puppets, a character makes a shadow of something else that is clearly not possible to create using only one's hands or body, or a normal sillhouette. For maximum effect, this is usually preceded by several more plausible shadows.