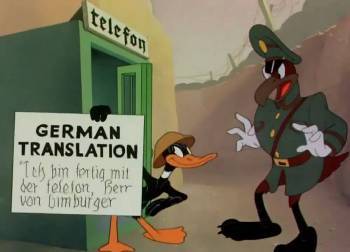 "Daffy the Commando" is a 1943 Looney Tunes War Time Cartoon, directed by Friz Freleng. It features Daffy Duck trying to get past enemy lines in Nazi Germany and a memorable scene where he hits Adolf Hitler over the head with a mallet.

Seeing that the cartoon is nowadays an Unintentional Period Piece, it's seldom seen on TV anymore. note  It has, however, been seen on public domain cartoon videos and even the Looney Tunes Golden Collection DVD set (sixth volume)

"Daffy the Commando" provides examples of: