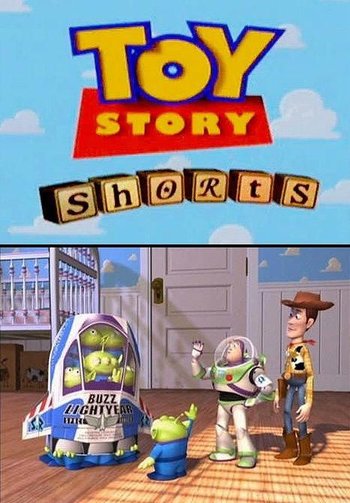 Woody: There's something to be said for the original.
Hamm: And that something is "Yard Sale".
Advertisement:

The year is 1996. Toy Story is due for its home video release, and Pixar wants to do something to promote it. So, it has decided to make a series of shorts to air on ABC during the commercial breaks of its Saturday morning programming; these segments would become known as Toy Story Treats

(alternatively known as Toy Story Shorts in some locations). Due to the large amount of shorts being made, rather than wholesale animate new content, it's decided to reuse assets from the original film and cut corners on the animation in order to get them to television in time. As for the content of the shorts themselves, they mainly act as skit comedy, with Woody, Buzz and others involved in various kinds of shenanigans with no real narrative tying everything together.

Since their airing on television, the shorts have been collected and included on various home media releases, such as the Toy Story & Toy Story 2: Ultimate Toy Box DVD set, the 10th anniversary Toy Story DVDnote as Easter eggs, and the 2010 Blu-ray. However, there are uploads of the shorts on their own on Youtube.

Rex is channel surfing -- get it?

Rex is channel surfing -- get it?