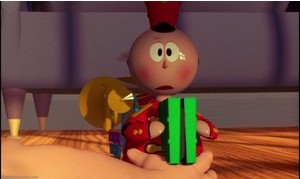 Tin Toy is a 1988 short film from Pixar, written and directed by John Lasseter.

A little tin wind-up one-man-band toy named Tinny is on the floor of a house when a diaper-clad baby named Billy toddles in. Tinny is delighted to see Billy, until he watches the baby start gnawing on a Rock-A-Stack ring. Fearing a similar fate, Tinny runs for cover—but not for long.

Tin Toy was the third animated film created by Pixar. At the time it was uncertain whether Pixar would actually be an animation studio or a computer company that sold animation computers. The first two Pixar shorts had cost the company a lot of money and some people at Pixar wanted to leave animation behind and concentrate on the software. Lasseter's short won an Oscar, and the idea of toys coming to life later led to the first computer-animated feature film, Toy Story. Tinny ultimately made a cameo appearance in the fourth film.