Conscience Makes You Go Back 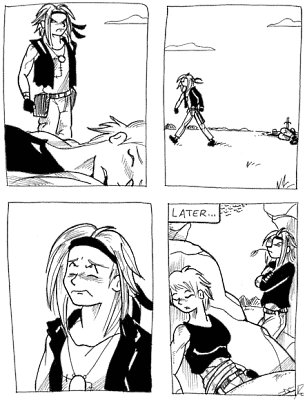 Paul: You can't just walk away.
Jarvis: You did.
Paul: [sighs] How did I end up with Jiminy Cricket? [turns the car around]
— Necessary Roughness
Advertisement:

Someone is about to walk away from those in need, but then have a moment when they realize it's wrong. So they go back and help.

Say our hero, or lancer, Bob isn't interested in helping Alice. Either he did his job already, or he owes nothing to her. It's not his problem, and he's Not in This for Your Revolution. So Bob just walks off... And then about thirty seconds to a few minutes later, Bob's face shows he can't do this. He has to go back and help. He's annoyed, or even angry, but he does go back. No new information has come to light to make Bob go back. Bob just realized on his own that he has to return.

This can overlap with 10-Minute Retirement, or Changed My Mind, Kid. The key is that we have to specifically see these characters stopping on their way, and realizing they have to do this.

Even villains can do this, because of course Even Evil Has Standards. When forced to own up to why they did it, the character may gripe that Being Good Sucks; an otherwise hostile character may claim that I Was Just Passing Through.

Keep in mind that new information is not what makes this trope. It is characters changing their mind with the information they already have.

Can also overlap with What You Are in the Dark if nobody would know if you didn't go back.

Compare Contagious Heroism, Everyone Has Standards and Returning to the Scene. For the romance/gender-related version after Unsettling Gender Reveal, see If It's You, It's Okay.

At first Sally is hesitant against sitting in the pumpkin patch with Linus waiting for the Great Pumpkin, but soon she decides to skip trick-or-treating and join him.

At first Sally is hesitant against sitting in the pumpkin patch with Linus waiting for the Great Pumpkin, but soon she decides to skip trick-or-treating and join him.