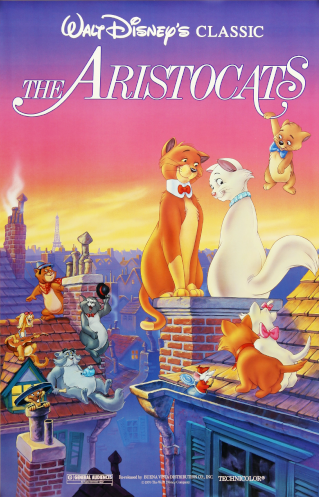 A man walks into a Disney talent agency and says, "Have I got an act for you!"

The agent leans back in his chair and says, "Okay, tell me about this act."

"Paris, 1910. The fabulously wealthy retired opera singer Madame Adelaide Bonfamille has decided to leave her entire fortune to her high-society pet cats. Her butler, Edgar, wanting the fortune for himself, drugs the felines with sleeping pills and abandons them in the French countryside... the night after the will was made... which isn't the least bit suspicious."

"Unlike cats in the real world, classy Duchess and her three kittens decide to make their way back home with the help of streetwise alley cat Thomas O'Malley. Along the way, he takes them to hang out with his alley cat friends, who treat the pets to some anachronistic jazz music (accompanied by even more anachronistic psychedelic graphics). No prizes for guessing the ending: Duchess hooks up with Thomas O'Malley, and Edgar gets what's coming to him courtesy of the alley cats."

The agent looks baffled. "Wow... what do you call an act like that?"

And the man replies with a smile, "The Aristocats!"

The agent shakes his head and says, "I think you're on the wrong page — this is about the Disney Animation, the filthy joke is The Aristocrats."

This marks the last film personally approved by Walt Disney himself, and is the 20th entry into the studio's extensive library. It was loosely based on an obscure story by Tom McGowan and Tom Rowe. Maurice Chevalier performed the opening song.

Has recieved a Spin-Off with Miriya & Marie, starring Marie as a Mentor Mascot to a Magical Girl.

On January 20th, 2022, a live-action/CGI remake of the film was announced by Disney. Will Gluck (Peter Rabbit) and Keith Bunin (Onward) will pen the script, with the film produced by "Olive Bridge Entertainment".

Roquefort the mouse did this to Edgar.

Roquefort the mouse did this to Edgar.