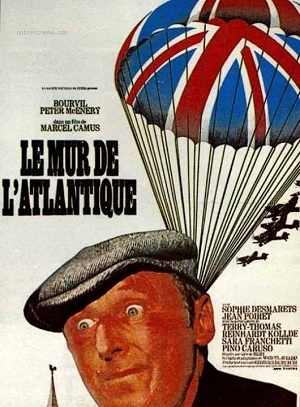 In 1943, the Avro Lancaster of Royal Air Force Bomber Command Lieutenant Jeff (McEnery) is shot down over Normandy, in occupied France. Jeff escapes the wreckage with German soldiers on his trail, and finds a hiding place (and love) thanks to Juliette (Sara Franchetti), the daughter of a restaurant-bar owner, Léon Duchemin (Bourvil).

Due to the local Kommandanturnote (German army administration building during the Occupation) officers mistaking him for a house painter, Léon finds himself in possession of V1 missiles launching pads plans. Jeff decides to bring said plans to London with the help of a Resistance network, and Léon finds himself forced to follow Jeff to the United Kingdom due to an incoming German patrol.

In London, Léon is interrogated, drafted and used against his will by the British military on the orders of Commander Perry (Terry-Thomas) and under the watchful eye of Jeff to prepare for a very special mission that will send him back to Normandy...

The film is named after the extensive fortifications system

Germans built along the coasts of Western Europe from 1942 to 1944.