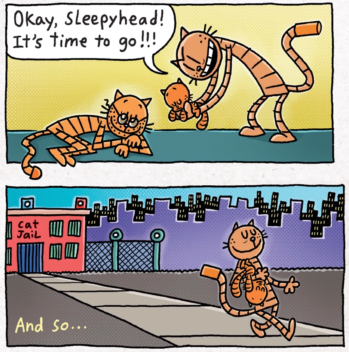 A cat 'nabbed during a catnap.
When asleep, people are inherently at their most vulnerable. Life passes on outside, but to the sleeping person, there's very little chance of even being aware of anything happening beyond what may be occurring in their dreams. Unfortunately, villains like to take advantage of this state, and choose to torment an innocent character while said character is snoring away. This villain may choose to murder them outright, or if they're supernatural, they can take it to their dreams and grant them awful nightmares. But what if murder is too messy, and giving nightmares too impractical?
Advertisement:

A character can be easily kidnapped from their bedroom. Even if they manage to wake up in time, they'll be too tired or shocked to fight back, and God help them if they suffer some form of sleep paralysis, or if their kidnapper is supernatural in origin. In fact, they're more often than not just dragged straight out of bed by their ankles, giving the audience a shot of their body sliding off the bed.

This isn't always Played for Drama, however; Lighter and Softer works could use this as a simple prank, or even as someone being Kidnapped by an Ally while they're in slumberland.

Sister Trope to Slain in Their Sleep. Note that this is when a character sleeps of natural causes. If the kidnapped character is rendered unconscious with chloroform, Knockout Gas, Slipping a Mickey, a Static Stun Gun, a Tap on the Head, or a Tranquillizer Dart, then it's just a normal kidnapping and not this trope.

Edgar kidnaps the cats when under the effects of sleeping pills.

Edgar kidnaps the cats when under the effects of sleeping pills.