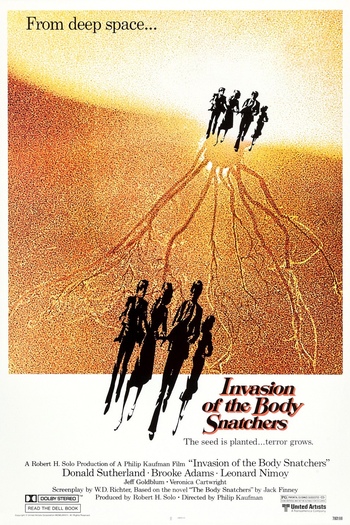 Be born again into an untroubled world.
"We came here from a dying world. We drift through the universe from planet to planet, pushed on by the solar winds. We adapt, and we survive. The function of life is survival."
Advertisement:

The first remake of the sci-fi classic Invasion of the Body Snatchers, directed by Philip Kaufman and released in 1978. For the other remakes, go here.

Donald Sutherland stars as Dr. Bennell (whose first name is now Matthew instead of Miles) and the setting is transferred to The City of San Francisco, working in an effective theme of urban alienation which, in some respects, actually reverses the theme of the original; at one point, a character expresses her paranoia that she keeps seeing people recognizing each other, isolation being such a feature of city life that excessive human contact itself is suspicious.

This version also focused on the "malaise" of The '70s and cranked up the Body Horror; little wonder, then, that three of its stars (Brooke Adams, Art Hindle, and Jeff Goldblum) all went on to make films with David Cronenberg. Also in the cast are Leonard Nimoy and Veronica Cartwright.

Try staying awake while you read these tropes:

Shrieking with the Enemy

Example of:
Eat the Camera

Shrieking with the Enemy