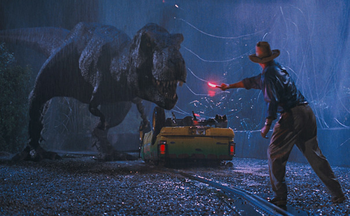 This takes "chase the red dot" a bit too far.
Stoick: Gobber, go with the men!
Gobber: I think I'll stay, just in case you're thinking of doing something crazy.
Stoick: I can buy them a few minutes if I give that thing something to hunt!
Gobber: Then I can double that time.
— How to Train Your Dragon
Advertisement:

When a group of characters face a threat, one or more characters will make that threat focus on them to the exclusion of the other characters.

This trope varies depending on the nature of the threat.

Often this is done intentionally, but it also can be done by accident. The Butt-Monkey is one of the most likely characters to accidentally draw aggro. Some online multiplayer games have plenty of player stories of the weakest character drawing aggro, thus ruining the party's battle strategy. A Leeroy Jenkins will almost always end up doing this whether they intend to or not.

Some games have spells and abilities which make enemies target one character. A Practical Taunt is a common form of this. Shield Banging can also be used.

The trope name comes from the fan term for these gameplay tactics in Massively Multiplayer Online Role Playing Games.

Compare Taking the Bullet, Take Me Instead, Encounter Bait (making enemies attack you, just for the sake of fighting them), I Am Your Opponent, Fishing for Mooks (drawing the aggro of just a small part of an enemy group, to pick them off).

See also We Need a Distraction, Stone Wall (a character who can tank well and often has this ability).