Literature / A Dance with Dragons 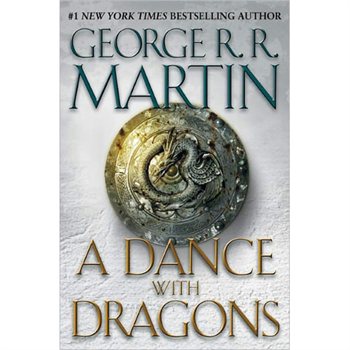 Not all men were meant to dance with dragons.
—Ser Barristan Selmy
Advertisement:

The fifth book in George R. R. Martin's Doorstopper A Song of Ice and Fire fantasy series, released in 2011.

The north deals with various perils; Jon Snow, the newest Lord Commander of the Wall, makes truces with the wildlings, while House Bolton struggles to maintain their position as the new Wardens of the North, replacing House Stark. Meanwhile, Stannis Baratheon makes desperate attempts to win the North to his cause, with varied results. Bran and company's travels beyond the Wall bring them to unusual places. And Theon Greyjoy, who was missing in the last 2 books, is finally revealed to be alive. He has been horribly tortured and mutilated by the extremely sadistic and psychopathic Ramsay Snow, the bastard son of Roose Bolton. Now he only answers to the name Reek, living in constant fear and trauma.

Across the Narrow Sea, Daenerys Targaryen endures numerous difficulties in ruling the slaver city Meereen, with treachery and opposition surrounding her at all sides. Multiple others travel towards her for other purposes - among them Tyrion Lannister, a mysterious figure named Griff travelling with his son Young Griff, a vicious pirate captain from the Iron Islands, and finally a group of House Martell representatives looking to contact Daenerys.

The novel has a staggering total of 18 POV characters. Though the novel starts out with Simultaneous Arcs with Feast, this novel eventually overtakes that one, adding a few chapters from characters in the southron six kingdoms to move the plot along. The prologue is provided by a skinchanger named Varamyr Sixskins. In the epilogue, we follow Kevan Lannister.

Like A Storm Of Swords, some releases of this novel were divided into two parts: Part 1: Dreams and Dust and Part 2: After the Feast. Certain materials from this book were adapted throughout Seasons 4, 5 and 6 of HBO's Game of Thrones, but with significant deviations.

Not to be confused with Dances with the Dragons, in spite of the similar names.

A Dance with Tropes: