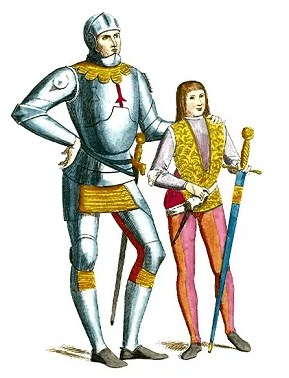 The squire is a knight's loyal servant, carrying out all his needs, including shining his armor, sharpening his sword, taking care of his horse, carrying his banner, and many other duties. The squire is often the son of a lord or another knight, who has been sent to learn to be a knight himself. This servitude lasts years as the squire learns all he can from the knight and ends with the squire being knighted.

Sometimes the squire will be far braver or a better fighter than the knight he is serving and ends up saving their life. They can also be treacherous, selling out their lord in exchange for wealth or an earlier knighthood from a rival. The squire could also be suffering under an incompetent or evil knight and may be looking for a change, or they might be just as incompetent or evil as their master.

Compare with Knight, Knave, and Squire, in which the squire is part of a trio. Related to The Apprentice. See Lady-in-Waiting for the female counterpart.