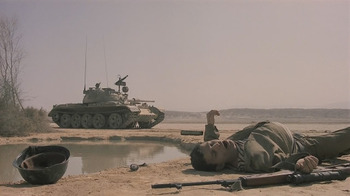 Fear of drinking water is a classic paranoia, especially since in medieval times or earlier it could be quite difficult to come by a clean water supply (just imagine what it was like in the days before water filtration and the only river within miles had thousands of people throwing all their waste, including biological wastes, into it upstream) and thus a well could be the center of life for miles around. If anything happened to it or anyone tried to contaminate it, you'd never know until it was too late...

As such, super-villains or government conspiracies putting horrible stuff in the water has been the fodder of fictional plots for years. In other settings, the paranoia is not justified but might still be relevant to the plot. In stories set in modern, developed countries, this trope often employs some Artistic License. The sheer quantity of fluid in most water infrastructures would dilute most added contaminants to virtually nothing, not to mention the various micro-organisms that would absorb the initial damage in many cases, or the security measures water facility equipment has to prevent exactly this kind of tampering. Realistically, achieving this intentionally would require jumping a lot of logistical hurdles (unless one believes in homeopathy, at any rate).

Compare Tampering with Food and Drink, which is at least normally intended as a (deadly) prank. Can be a Poison-and-Cure Gambit. See also Cool, Clear Water for when a body of water is assumed to be clean based on how it looks, even though it's more realistic for it to be just as tainted and unsafe to drink as this trope.