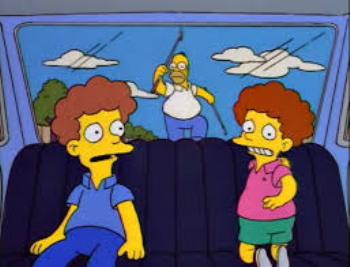 Homer loses out on winning tickets to an upcoming Springfield Atoms football game. What's worse, his goody-two-shoes neighbor, Ned Flanders, won the last pair. After a failed attempt at bashing Flanders' skull in and take the tickets, Homer decides to spend the day with his neighbor at the game — and Homer realizes that Flanders is not such a bad guy after all...but all the time Homer spends with Ned puts a strain on the Simpsons and the Flanders.

The tropes in this episode include...

Homer prays to a waffle stuck on the ceiling.

Homer prays to a waffle stuck on the ceiling.