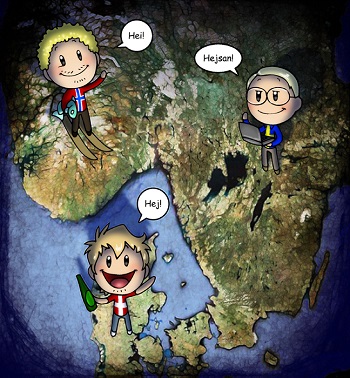 Clockwise from top left: Norway, Sweden and Denmark
"Occasionally I idle time away by wondering what cities would be like, were they people. Manhattan is, in my head, fast-talking, untrusting, well-dressed but unshaven. London is huge and confused. Paris is elegant and attractive, older than she looks. San Francisco is crazy, but harmless, and very friendly. It's a foolish game: cities aren't people."
— Neil Gaiman, "SIMCITY"

This is a particular type of Anthropomorphic Personification that depicts a country (or some other sociopolitical or geographical unit) as one person, using that person's actions and foibles to make a comment on the country's politics and history. Sometimes this "person" is an animal or landmark (like the Statue of Liberty). This sort of metaphor can be very descriptive of the feelings a writer has about a place, be they great affection or sentimentality, or something else.

While it is Older Than Dirt with precedents going as far back as The Middle Ages if not Ancient Greece (the myth of Europa and Asia), this technique has been closely associated with newspaper political cartoons for the past few hundred years, and nowadays can be found in webcomics as well. As such, it may be considered a genre of comic, though it's been known to appear in other media (such as the anime of Hetalia: Axis Powers) once in a blue moon.

Advertisement:
Classic Characters of this Type

Works That Use This Trope: