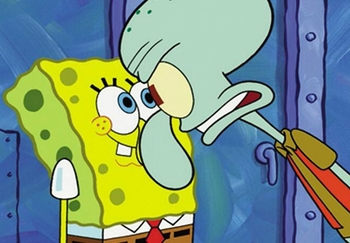 "Do you have to be such an accommodating buffoon?"
"Squidward, everyone knows I'm a sponge. I look nothing like a balloon."
"It's been obvious for weeks—months—Lababibi despises Yvernau. He's probably the only person in the entire convention who didn't know it."
— Dame Estelle Matsuko, The Shadow of Saganami
Advertisement:

Bob hates Alice. He makes it very clear that he hates her. However, for some reason, no matter how blunt he is with her, she is not only unaware that he hates her, but actually thinks they're friends.

A sub-trope of Mutually Unequal Relation. Oblivious to Hatred is when a character, usually The Ditz, a Cloud Cuckoolander, or has a Small Name, Big Ego, or is a Horrible Judge of Character, is blissfully unaware of how much another character hates them, despite how blatant they are about their feelings. This trope can often result in either an Insult Backfire or Insult Misfire.

When a character does become aware of the other's dislike for them, it turns into Somebody Doesn't Love Raymond. For when a character can't accept that another isn't in love with them, see Mad Love. Compare Unknown Rival and contrast Oblivious to Love. See also Hidden Disdain Reveal.