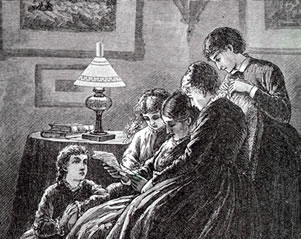 "A book for girls being wanted by a certain publisher, she hastily scribbled a little story describing a few scenes and adventures in the lives of herself and sisters—though boys were more in her line—and with very slight hopes of success sent it out to seek its fortune.
Things always went by contraries with Jo. Her first book, labored over for years, and launched full of the high hopes and ambitious dreams of youth, floundered on its voyage, though the wreck continued to float long afterward, to the profit of the publisher at least. The hastily written story, sent away with no thought beyond the few dollars it might bring, sailed with a fair wind and a wise pilot at the helm into public favor, and came home heavily laden with an unexpected cargo of gold and glory."
—Louisa May Alcott, Jo's Boys
Advertisement:

So Louisa May Alcott vicariously describes the story behind the publication of the book that made her a celebrity overnight with an instant success most authors never dare to dream of. Alcott never intended, however, for Little Women to be her magnum opus; she only needed a little money. Isn't irony wonderful? The novel was published in two volumes in 1868-1869.note The "first book" described above is Moods, an intensely (now nearly unreadably) moral melodrama for adults that Alcott considered her real masterpiece; it attracted some favourable reviews but never a wide audience, despite the author revising it several times even after initial publication.

Little Women is the story of four sisters, modeled after Alcott and her own, whose once-prosperous New England family has fallen into genteel poverty. Now all young teenagers, the book chronicles their various small attempts to cope with their newly-reduced status, get along with each other, and just generally grow up while their father is away during The American Civil War. The March sisters are:

Their closest friend is their wealthy old neighbor's newly-arrived grandson: handsome, mischievous, half-Italian Theodore "Laurie" Laurence. He quickly befriends Jo, and the others soon after. Women in town wonder to which sister their mother is planning to marry him off, but in fact they are all Just Friends, Like Brother And Sisters—which becomes a significant plot point later.

Other characters include: their strong-willed mother Margaret, whom they call "Marmee" (in the 19th-century New England accent, "Marmee" would be pronounced "Mommy"); their father, a gentleman reverend ruined financially through helping a friend (an idealized version of Louisa's father, prominent Transcendentalist Bronson Alcott); their maid and friend, Hannah; Laurie's tutor, John Brooke, who falls in love with Meg; and their nightmare of a meddling relative, Aunt March, for whom Jo and later Amy work as a companion. The book is fraught with Shout Outs and Homages to Pilgrim's Progress and Anvilicious Aesops at a time before that was considered cliche.

The first edition of Little Women ended with Meg and John's engagement. With no Fora or wikis to conduct their Ship-to-Ship Combat, the fans were left to bombard Alcott with letters demanding a sequel, mostly to see Jo and Laurie get married, in the earliest case of Shipping as we know it today. Alcott duly wrote the sequel, but with the firm resolve that "I won't marry Jo to Laurie to please anybody."

Thus came Part II, occasionally published separately under the title Good Wives in the UK. Meg and John get married and have their twins, Beth dies, Amy goes to Paris, and Jo turns down Laurie and goes to New York to pursue her career. Laurie, faced with the dilemma of killing himself or going to Europe, opts for the latter, where he falls in love with and marries Amy. Manfully supporting her parents while grieving for her dead little sister, life improves for Jo near the end when she marries her beta reader and best friend, a wise German professor, Friedrich Bhaer, and Aunt March dies and leaves Jo her estate, Plumfield.

The book has been adapted to film several times.

It has also spent time in other media:

Also, despite sharing the same names for the protagonists, this one has absolutely nothing to do with Burst Angel.

Note: Little Men and Jo's Boys tropes are NOT LISTED HERE. They can be found and added to this page.