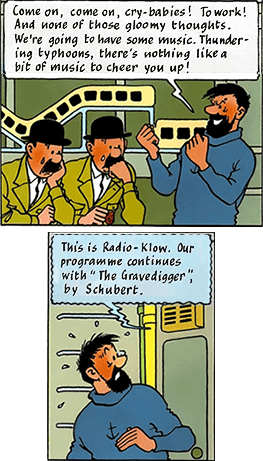 [two agents are being pursued and they are in mortal danger; "The Ride of the Valkyries" starts playing]
Agent Mulder: Wagner?
Agent Doggett: What do you want?
Agent Mulder: I take it back. It's perfect.
— The X-Files, "Vienen"
Advertisement:

A character is upset about something. They turn on the radio, only to be confronted with a song that seems to mock exactly the thing that's upsetting them.

Related to Cold Turkeys Are Everywhere. See also Your Television Hates You. A Super-Trope to Losing Horns, where it's just a musical sting that's used for mockery. Not to be confused with "The Villain Sucks" Song or "The Hero Sucks" Song, where a character deliberately makes music that mocks another one. Also don't confuse with Mocking Sing-Song, that little tune children sing to tease someone.