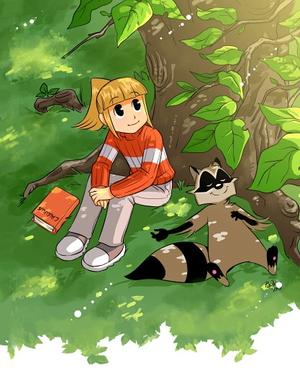 A webcomic of comedy, romance, adventure, and raccoon propaganda.

is an English and German-language Long Runner webcomic written by Oliver Knörzer "Novil" and illustrated by Powree, about the adventures of middle-schooler Sandra North and her pet talking raccoon, Woo. It's drawn in an Animesque style with some Western comic stylizations, and makes up of mostly unconnected story arcs. Imagine Calvin and Hobbes aged up a few years, crossed with iCarly, and with some more serious plot threads.

The story mostly focuses on Sandra and Woo's misadventures but will also focus on one of Sandra's two best friends, Cloud and Larisa, or Woo's adventures with his woodland friends, Shadow the fox and Sid the squirrel.

It also has a forum thread on this site.

A video game based on the comic, Sandra and Woo in the Cursed Adventure

, published on July 8, 2022, the comic has seemingly been put on an indefinite hiatus without any prior announcement, with said strip serving as an anticlimatic Ambiguous Ending. Strip 1339

was released on November 25, 2022. But Novil said that this strip will be the last one drawn by Powree.

Sandra and Woo contains examples of: