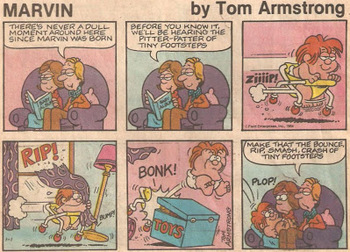 Marvin is a comic strip that started in 1982 and is drawn by Tom Armstrong. It centers on its titular baby, the redheaded Marvin, and his family, which includes parents Jeff and Jenny, grandparents Roy and Bea, and dogs Bitsy and Junior. Was given a TV special in 1989 called Marvin, Baby of the Year.

The latest strip (and ones up to 30 days earlier) can be found here.

This newspaper comic has examples of: