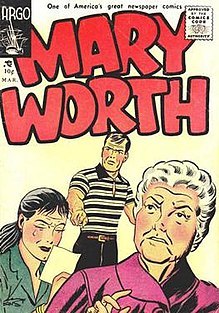 is a soap-opera style comic strip by Allen Saunders.

The title character is a recent widow who moves to a condominium complex in California, where just about everybody seems to have some sort of problem. In most of the strips, one of the "young" people in the neighborhood is troubled by a problem such as drug abuse, alcoholism, infidelity, or teen pregnancy, which Mary takes it upon herself to fix. Though she is the title character, and the catalyst for most of the strips' dramatic plots, Mary herself doesn't appear all that frequently. Rather she is set up as a frame device to get each plot rolling, usually through her incessant meddling sage counsel.

The strip is subject to frequent parody from other newspaper comic strips and was frequently parodied by Carol Burnett on her variety show. The Comics Curmudgeon has brought attention back to it.

There's also an old English legend about a ghost called "Bloody Mary Worth" who will slash at your face if you repeat the phrase "Bloody Mary" thirteen times in front of a mirror. This old legend has nothing to do with the comic strip, though; Saunders hadn't heard of the legend when he named his character, and the comic strip Mary Worth would prefer to serve you salmon squares instead.