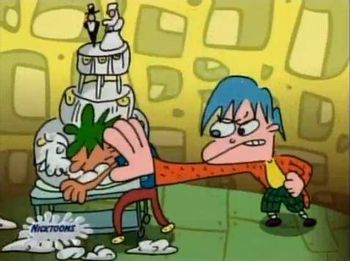 June does this all the time to poor Henry.
Charlie: ...Whereas I am a well-known rascal. When I don't do the wrong thing, people are disappointed.
Alan: Was that supposed to make me feel better?
Charlie: No, the story was about me. God, you're such a narcissist!
— Two and a Half Men

Most of the time, the big jerkass in a story is an antagonist, provoking delight when they are put in their place by the main characters. The Unsympathetic Comedy Protagonist is where the main character has undesirable traits where they act cruel, sometimes even villainous, to others, yet they are supposed to be rooted for and supposedly the hero of the story, despite being pretty much everything a human being shouldn't be... or everything a human being essentially is. If absolutely everyone is an unsympathetic jerkass, you are looking at a World of Jerkass.

There are a couple of things at the core of this trope, as well as go to different extremes. Because much of comedy is derived from eliciting laughs at another's misfortune, the Unsympathetic Comedy Protagonist is often crucial to the comedic formula. If horrible things happened to a character that the audience genuinely sympathized with, the reaction to their plight would be shock and angry letters rather than guffaws and chortles. If the character brought the misfortune on themselves, or just generally seemed like they deserved it, the audience can disconnect from their pain and let loose with the belly laughs when the character gets the inevitable Pie in the Face.

Sometimes the character behaves this way because they are the only moderately sane, intelligent person and has to deal with the mess caused by apparently nicer people. Alternatively, he or she is someone whose loneliness and self-loathing make them, if not likable, at least pitiable, despite engaging in Comedic Sociopathy. It's exactly this engagement that makes it entertaining when they are on the receiving end of it. In other cases —despite the name — they do garner some sympathy via Pet the Dog moments or showing signs of being The Atoner and a Jerk with a Heart of Gold but struggle to get past their own nature and continue to treat others poorly.

Nevertheless, it's not surprising when watchers actually take the "Unsympathetic" side of the character literally, with less than pleasant consequences for the fandom if they don't shut up about it, so it's not surprising that most try to avoid basing an entire series (at least where big money is involved) on this. This trope is often the difference between laughing with them and laughing at them if there's any laughing at all. Despite all this, there are a few actors who try to make a living out of portraying these characters (e.g. Will Ferrell, Ricky Gervais, Adam Sandler), to extremely mixed results that relies heavily on the actor's ability to be charming (at least to the audience) and not over the top, which usually creates a "love them or hate them" response from the audience.

This seems to be more prevalent in British comedy than in US comedies. If it's an ensemble comedy with 4+ main characters, expect one of three things: 1) at least one of them to channel this role to some degree (and don't be surprised if they're also the Token Evil Teammate), 2) for the role to jump around as the various plots demand or 3) for some combination of the two.

Compare with Jaded Washout (a specific social category that is a very popular choice as this in sitcoms), Nominal Hero (when character does heroic things for all the wrong reasons), Small Name, Big Ego (a flaw often present in these characters because its funny and easy to mock) and Ineffectual Sympathetic Villain (which many of these types will be as well, being foul but also hilariously hopeless and pitiful, apart from a few competent ones). Often the Smart Jerk in a Smart Jerk and Nice Moron pair. Contrast with Designated Hero when the Unsympathetic part is unintentional and therefore the character becomes neither Karma's punching bag nor the audience's laughingstock.

Not to be confused with Sociopathic Hero or Heroic Comedic Sociopath; those pages are about one way a character can be a horrible person, while this page is about characters who are horrible people in a comedy (for that reason or otherwise) having bad things happen to them.

Also, not confuse this with Villain Protagonist, an exagerrated form of this trope.