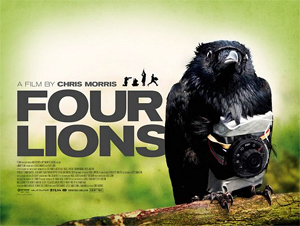 Four Lions is the debut feature film directed by Chris Morris, and written by Morris in collaboration with Jesse Armstrong and Sam Bain of Peep Show fame.

It's a comedy of the type where a bunch of ordinary blokes, none of them the very sharpest of minds, take on a task bigger than themselves. Similar to The Full Monty, in a funny way. Except that they want to be Islamist suicide bombers.

Riz Ahmed stars as Omar, the smartest (but still not-that-smart) of the gang of dim-witted wannabe terrorists. Kayvan Novak plays his cousin Waj, Nigel Lindsay plays Barry, an English convert, and Adeel Akhtar plays Faisal, a naive animal trainer. Benedict Cumberbatch has a small but amusing role near the end as a hostage negotiatior.