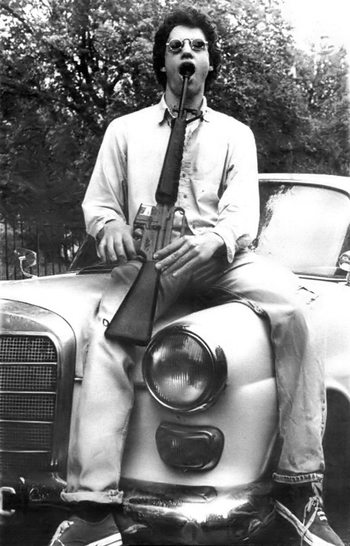 Christopher J Morris (born 15 June 1962 in Colchester, England) is an acclaimed English actor, writer, producer, composer and director whose best-known work is probably the satirical current affairs programme Brass Eye, in which he fooled a Member of Parliament into asking the House of Commons to ban a fictional drug and tricked pudgy rocker Phil Collins into representing a fake anti-paedophile campaign called "Nonce Sense".

Morris's career began as a radio presenter on Greater London Radio, but he was soon at work on satirical news show On The Hour, which he co-wrote with occasional collaborator Armando Iannucci and a number of other writers. He also starred in it as stern anchorman "Christopher Morris" and various other characters. This was then adapted for television as The Day Today, with Morris reprising his roles. That was followed by semi-spin-off Brass Eye and the dark "ambient comedy" for radio, Blue Jam (later adapted for television as Jam).

His penchant for pitch black humour and fearless parody of public figures made him something of a televisual enfant terrible for a time, particularly after the 2001 Brass Eye paedophile special was attacked for supposedly making fun of paedophilia and child abuse (it was actually satirising the media's then-preoccupation with sensationalised paedophile stories, and the subsequent bouts of civil unrest that they caused). In one notable case The Daily Star published an article attacking the "paeodphile comedy" opposite a photograph of then-15-year-old singer Charlotte Church

◊ in which it commended the size of her breasts.

It didn't exactly help him that once, in a fit of pique at Channel 4 bureaucracy, he inserted a subliminal message in a Brass Eye episode attacking Channel 4 bigwig Michael Grade (the words Grade Is A Cunt were displayed onscreen for a single frame

However, his comedy of late seems to have taken a calmer route, with 2005's Nathan Barley being a relatively conventional sitcom satirising shallow media halfwits in London's Hoxton area. However, despite extensive publicity it was a ratings disaster and alienated some members of Morris's fandom, who derided it for attacking easy, harmless targets and - perhaps more damningly - for not being particularly funny, though in recent years it has been vindicated for predicting the rise of social media.

As of 2010 he is back to his old tricks: his first feature film, Four Lions, is a comedy about Islamic suicide bombers.