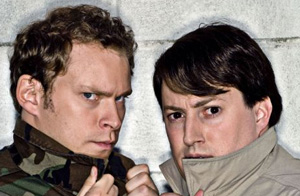 "I've made a psycho call to the woman I love, kicked a dog to death and I'm about to pepper-spray an acquaintance... I mean, what's happened to me?"
Advertisement:

Peep Show (2003-05, 2007-10, 2012, 2015) is a very darkly comical show about two very ordinary weirdos: Jeremy "Jez" Usbourne (Robert Webb), a manchild and would-be musician, and Mark Corrigan (David Mitchell), a fifty-year-old in a thirtysomething body. The show's gimmick is that (with very few exceptions) every camera shot in the show is taken from the point of view of one of the characters, whether Jez and Mark or just someone passing by. It also allows the viewer to hear the internal thought processes of both Mark and Jez as they bumble through their lives... and the show makes good on its promise of showing us everything going on in their heads.