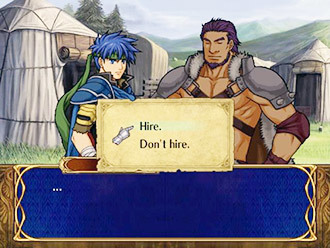 Super-secret character mentioned directly in the manual and whose weapon of choice is conspicuously for sale before you have a party member who can use it. They aren't required to stay in the party, but may temporarily join you. If you really want them back, some games will let you hunt them down again, often by some non-intuitive and convoluted means.

The biggest problem with these characters is getting them can happen very late in the game. Although most games are kind enough to have them near the same level as your characters, special skills or weapons that need to be built up are going to take a long time to get. In addition, since they're optional, the majority of the plot can't assume you have them. Thus they'll have less impact. If the game offers more than one of these, they may be Mutually Exclusive Party Members of whom you can only choose a limited number (possibly via some never-explained mechanic or minor choice several hours earlier).

In some cases, the Optional Party Member can potential be a Sixth Ranger Traitor, who hinders you through various means, from purposefully fleeing, to actively backstabbing the other party member.

Similar to the Guest-Star Party Member, the Optional Party Member is commonly either hacked into the party or used as part of a challenge. Sometimes they may be a Joke Character who isn't very useful but other times they may be one of the best characters in the game. They might even be both.

Many Strategy RPGs will use this trope a lot, as in fact the story will often be written with the thought of how the party member may be permanently killed off at any moment in the story. Most of the time it is when they are not mandatory, but there are exceptions.