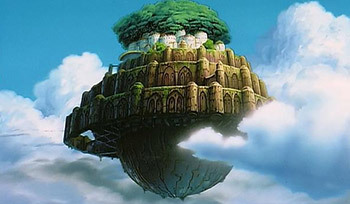 The sky castle of Laputa in Castle in the Sky.
"The weather in Glitzville today will be sunny with a chance of more sun. It's above the clouds, stupid."
— Paper Mario: The Thousand-Year Door
Advertisement:

Waterfalls are often expected to fall from the continent. Even if there's an explanation for how the place stays in the air in the first place, how they can possibly not run out of water is never explored. (While it's not that hard, as long as there is some sort of world below and the continent doesn't permanently float above the clouds it can get its water the same way any mountain range does: rain.)

These settings may consist of a single floating landmass or of multiple separate ones. In the latter case, travel between distinct islands may necessitate the use of bridges or, among more distant ones, airships or other flying vessels — unless the natives can fly under their own power, of course.

Many video game levels from the early generations of 3D graphics tend to invoke this trope due to the limitations of the platform, and to prevent the player from going anywhere they want. See Floating Platforms for this kind of level design. How they're connected to other levels and how the protagonist leaves these areas often go unexplained.

The Ur-Example is the original Cloudcuckooland, from Aristophanes' The Birds, but the Trope Codifier is the City of Laputa, from Jonathan Swift's Gulliver's Travels. Swift also originated the Colony Drop: Laputa maintained control of its groundbound colonies by landing on any rebellious population centers, crushing them beneath its armored underbelly. The trope was popularized in modern popular culture by Hayao Miyazaki's Castle in the Sky. The Trope Namer is the Floating Continent orbiting Jupiter in Star Blazers/Space Battleship Yamato.

Ominous Floating Castle is its own trope. Characters who live on the ground and wish to reach a floating continent will likely need to undertake a Journey to the Sky.

A group of islands held aloft thanks to the power of Shiki.

A group of islands held aloft thanks to the power of Shiki.