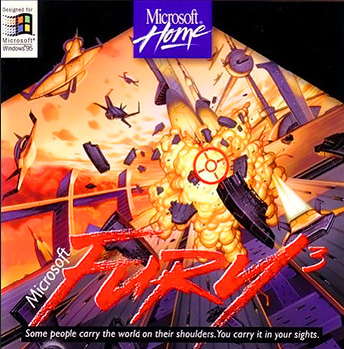 Fury³ is a space combat shooter, released in 1995 for the PC, developed by Terminal Reality, published by Microsoft. It uses a very similar game engine to Terminal Reality's previous game, Terminal Velocity (but built for Windows 95 rather than MS-DOS). A sequel was entitled Hellbender.

The official plot synopsis is as follows:

"During the IP Wars, the Terrans designed a race of bionic warriors known for their cunning and their brutal strength. Physically superior and ruthlessly aggressive, a single troop of Bions could eliminate the inhabitants of a planet within days.

The Bion war effort saved the Coalition, but nearly destroyed Terran. After the war, Bion aggression could not be contained. Peaceful coexistence between Bions and Terrans proved impossible. The ensuing Bion Wars are known for their brevity - and violence.

In 2832, the Coalition ordered complete Bion dismantlement, and instituted Terran's renowned Council of Peace - a military defense force inferior to none. Unknown to the Coalition, a few Bions survived and have assembled on a distant planet called Fury.

Their plan is to seize seven more Coalition planets whose resources will help them attain their ultimate goal - total domination of space from the Bion Fury outpost.

As a member of Terran's Council of Peace, it's your mission to stop them. Welcome home, <Councilor>."