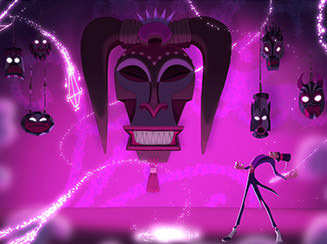 Face your fate.
"Remember mom's birthday? You sent her socks! Honestly, who sends socks to a magic mask with no feet?!"
—Aku Aku to his brother Uka Uka, Crash: Mind Over Mutant
Advertisement:

One way to indicate a Mask of Power is having it float. Sometimes, it means that the mask itself is sentient.

Note: That doesn't include masks which float with other items due to Selective Gravity.