Video Game / The Labyrinth of Time 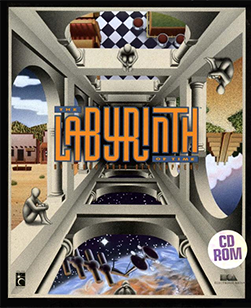 From the ancient past to the distant future. The web of history is the ultimate labyrinth.
Advertisement:

The Labyrinth of Time was a 1993 Adventure Game made by Terra Nova Development.

You're an office worker living a dull, dreary life, but on the subway ride home one gray Friday the ghost of Daedalus suddenly pulls you out of the normal world. He explains King Minos has enslaved him to build a Labyrinth even greater than the one he built in the ancient days of Crete. This one bridges time and space, and allows Minos to invade all eras and conquer them with his supernatural powers. Daedalus begs the player to find a way to the heart of the labyrinth and destroy it before Minos can finalize his conquest.

Unfortunately for Terra Nova they released the game at about the same time as Myst and The 7th Guest, leaving Labyrinth of Time virtually ignored. To this day only hardcore adventure fans are likely to know it even exists.

, and available for purchase on all major computer platforms

as well as iOS

The Labyrinth of Time provides examples of: