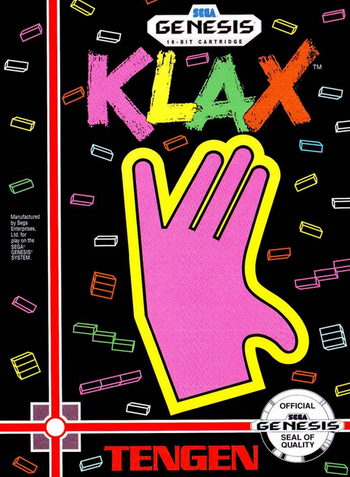 "It is The '90s, and there is time for Klax"
— Title screen for Klax
Advertisement:

1989 game developed by Atari. Coloured tiles tumble down from above; you have to catch them on your paddle and drop them into a 5×5 bin. They vanish when you line up three or more of the same colour, a feat referred to as a "Klax". The paddle can hold up to five tiles.

A simple premise: Falling Blocks plus Match-Three Game. Of such things, life-shattering events are made. Definitely Nintendo Hard.

The game is 100 levels ("waves") in length, giving the player the opportunity to skip five or 10 of them every five levels, but never allowing you to skip past the 91st stage. So a minimum start-to-finish playthrough is 40 levels long. To pass a level, you have to meet its requirements — in order in (almost) each set of five waves: make a number of Klaxes, make a number of diagonal Klaxes, achieve a certain score, survive a set number of tiles, and make a number of horizontal Klaxes. You lose if you fail to catch a certain number of tiles (three, four or five, depending on how far you warped at your last chance) during a set of five waves, or if you fill the bin entirely without clearing enough tiles.