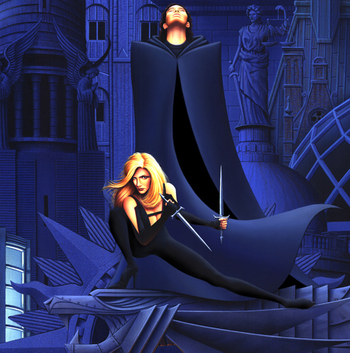 Noctropolis is a 1994 Adventure Game with a twist. Rather than being a daring adventurer in a fantasy kingdom or a clever astronaut in deep space, you play a Superhero.

Peter Grey's world has come crashing down with the failure of his book store and his wife's infidelity. His only solace is the monthly adventures of Darksheer, the grim avenger of the night who protects an eternally darkened city called Noctropolis. But he's about to lose that too, as the latest issue ends with Darksheer capturing the last of Noctropolis's supervillain community and hanging up his cape.

But then Peter finds out he's the winner of the "I Want to be Darksheer!" contest and receives a new issue showing a new villain named Flux breaking the worst members of Darksheer's Rogues Gallery out of jail, as well as a magical coin that teleports Peter to Noctropolis itself. After bumbling through a beginning adventure he assumes Darksheer's mantle, but is he up to the job of saving the city from the forces of evil?

The game was released to little fanfare, with physical copies long out of print for years. Fortunately it was finally re-released digitally by Nightdive Studios on January 21, 2016 on GOG.com and Steam thanks. The re-release features widescreen support and an enhanced soundtrack.