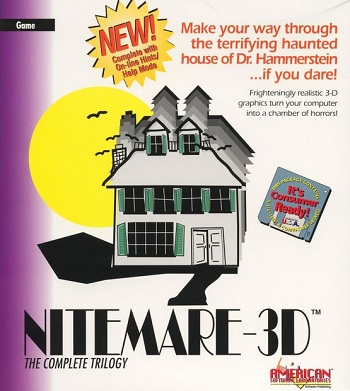 Nitemare 3D is a haunted-house-themed First-Person Shooter for DOS and Windows 3.1 PCs, based on the Wolfenstein 3D engine and released in 1994. It was nominally a follow-up to the Hugo's House of Horrors series of adventure games, but instead of solving tricky Adventure Game puzzles, you just shoot stuff. Well, and collect keys and cards needed to advance to the next level. And find hidden passages. And solve the occasional Block Puzzle. The game expanded greatly on the concept introduced by Wolf3D, with the aforementioned keys and cards as well as an on-screen minimap showing the nearby areas you've visited and any enemies in the vicinity.
Advertisement:

Still has a cult following, due in part to being continually updated for compatibility with the latest version of Windows.