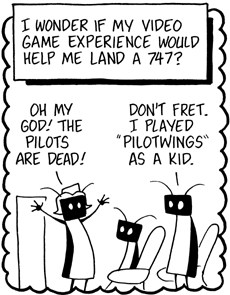 "I even got to the Bonus Stage with the diving penguin!"
"I can do this, Joe! I've seen Patton over a hundred times!"
— Linkara, Kickassia
Advertisement:

This is a situation in which a character acquires a needed skill, not by ever actually learning that skill, but by playing a video game or watching a movie that simulated that skill.

Just as much of a Hand Wave as Suddenly Always Knew That, but has the additional benefit of the "Hey, I could do that!" for the audience, enhancing their experience.

Moral Guardians often take this trope way too seriously, begetting the concept of Murder Simulators. However, if it did work, you could learn medicine from Dr. Mario and cure people with nothing more than a high powered microscope and a bag of Skittles.

Now as far as the controls, basic sense of tactics, fundamental concepts, and (hopefully) physics are concerned, simulators can supplement real and semi-real (more hardware-based) training and experience. After all, that's what simulators are supposed to do in the first place. Also note the difference between video games designed to be fun, and simulator machines designed to accurately emulate an experience and be used in training.

See also Ascended Fanboy, Taught by Television, Falling into the Cockpit. When someone who knows what they're doing for real fails at a video game version, then it's I Don't Know Mortal Kombat. When someone tries to use fighting game moves in real life (and fails horribly), it can lead to What the Fu Are You Doing?. There's a lot of room for Product Placement with this trope. For specific works that can teach topics (whether intentionally or not), see also Unconventional Learning Experience. Contrast But I Read a Book About It.

Coops' video gaming skills that he learned over the years are put to use when he rewires MEGAS' entire control layout to correspond to video game controllers.

Alternative Title(s): Fiction Taught Me How To Kick Ass

Coops' video gaming skills that he learned over the years are put to use when he rewires MEGAS' entire control layout to correspond to video game controllers.