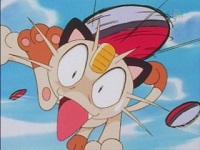 Well, that's one way to win a Pokemon battle.
Pikachu can shock you, but otherwise it's pretty cute, don't you think? So if you don't let them evolve, they make great pets, especially for little girls.
— Giselle

Ash, Misty, and Brock encounter a thick fog while traveling. They come upon a group of boys in school uniforms drilling a smaller student on Pidgey while forcing him to run a treadmill. Ash interferes with their bullying, only to be told all about Pokémon Tech, the première Pokémon school that lets you enter the Pokémon league without badges. The fog clears up, apparently an artificial effect caused by the school. The boy introduces himself as Joe. Joe inadvertently insults Misty's gym, and she challenges him to a fight. Even though Joe uses a grass type Pokémon, Misty beats him with her greater experience. An attractive girl named Giselle shows up to berate Joe and make fun of Ash. She beats Misty using a rock type, despite the type disadvantage and then faces Ash with Cubone that uses "cheap" bone related moves. Ash pulls her own trick on her by beating her with Pikachu, by ordering him to do cheap moves.

Team Rocket makes a brief appearance and is revealed to have tried to enter Pokémon Tech but having failed the entrance exams. The students repel them by pelting them with Pokéballs. Ash and company leave on good terms.