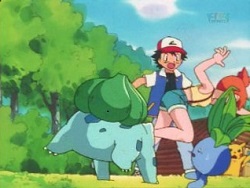 Ash and his friends get lost in a dense forest on the way to Vermillion City. Ash spots an Oddish, which Misty tries to capture. They are interrupted by a Bulbasaur, which Ash tries and fails to capture.

Later they cross a bridge which tips over, dropping Brock into the river. Ash and Misty manage to get by, but they get caught in several traps on their rush to find Brock.

Eventually they find Brock in a hidden village for Pokémon to recover from injury or abandonment. The Pokemon are cared for by Melanie and protected by Bulbasaur.

Later Team Rocket tries to steal the Pokémon at the center, but they are stopped by Ash and his friends. Afterwards Melanie asks Ash to take Bulbasaur with him so Bulbasaur can grow.