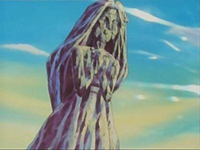 She's the most beautiful rock I've ever seen.
My love...I'm waiting for you.
— The ghost of the maiden

Japanese Title: The Ghost Pokémon and the Summer Festival

Ash and company arrive at a small port town celebrating a summer festival. Brock mourns the end of summer, wishing he had more time to meet cute girls wearing swimsuits. Team Rocket, meanwhile, show up with the ingenious criminal plot of...scrounging the ground for dropped change. Both Brock and James are warned about a mysterious girl making trouble for them in the future. Exactly as stated they both get drawn in by the beautiful ghost of Maiden's Peak. While Jessie attacks the ghost by firing a rocket launcher at it, Ash's Pokédex reports that the ghost is actually the Ghost-type Pokémon Gastly. Gastly is unusually strong and smart for a wild Pokémon and capable of shape-shifting to scare every Pokémon sent to attack it. They struggle until the sun rises and Gastly vanishes.