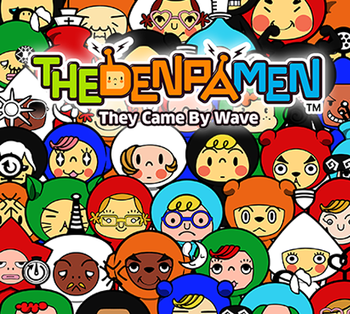 A series of unconventional RPGs for the Nintendo 3DS, made by Genius Sonority. Known in Japan as Denpa Ningen no RPG—roughly, "Radio People RPG." But what is a Denpa Man or Radio Person, and why are they RPG-ing? Ah, there's the rub.

As the story goes, the airwaves in our world are populated with strange little guys called "Denpa Men." Denpa Men come in many different colors, shapes, and sizes, with different skills available to them. Normal people can't see them, but if you so happen to use the "camera" feature on your 3DS, you can spot them and catch them! Denpa Men don't mind being caught. They kinda like meeting new people, actually. If you get enough of them, you can amass a party. And if you get together a strong enough party, you can enter the Tower of Evil to defeat the Evil King!

There may not be much story to speak of, but The Denpa Men focuses more on mechanics than story. It incorporates augmented reality "hunting" mechanics with a streamlined RPG experience, full of party building, dungeon crawling, and battling lots of unique-looking enemies. The game's randomly generated party members mean that there's a truly vast number of ways to go about building your party, and you'll need to balance your skills and abilities to make a team capable of taking down the Evil King!

In late September 2012, a sequel was released in Japan, titled Denpa Ningen no RPG 2. It came to the West on May 30, 2013 as The Denpa Men 2: Beyond the Waves. While the main objective isn't much different than it was before—"save Crystal and your children, Jasper and Amber" instead of just "save Crystal", but many cool new features were added, such as an expansive overworld, all gear being visible, and an interesting take on Player-versus-Player. More on that later.

A third game came to Japan on August 8, 2013, predictably titled Denpa Ningen no RPG 3. It was released in North America and Europe on May 8, 2014 as The Denpa Men 3: The Rise of Digitoll. This game seems to take place before the events of the first and second games, as Digitoll is still bustling, and Crystal is referred to as the hero's "childhood friend" as opposed to his girlfriend or wife.